How To Say No Without Feeling Guilt (Step-By-Step Instructions) 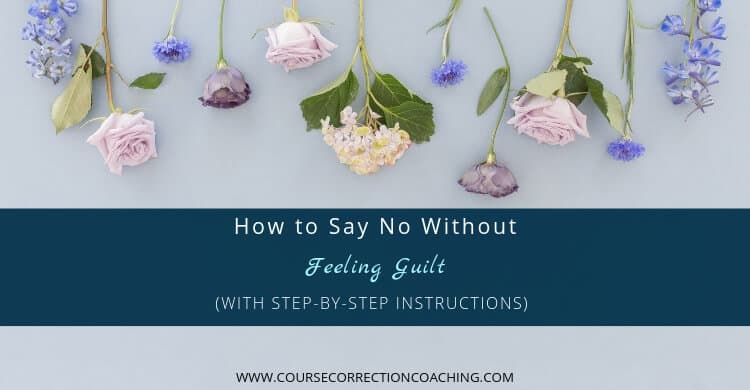 Today I’m going to teach you how to say no without feeling guilt.

Being able to say no (and feel great about it) is one of the most requested coaching topics from clients, especially the super-achievers who want to up-level their career yet can’t because they’re too overwhelmed to do so.

I’ll take you step-by-step through how to change your mindset around saying no (so that you can do so with confidence and ease).  And I’ll also give you some concrete steps (with examples) on what to do and say so that you’ll be able to say no gracefully.

How to Change Your Mindset and Say No Without Feeling Guilt

Guilt is an emotion centered around doing something wrong (or even thinking about it).  It often comes up when saying no because you feel that you’re being selfish or because you believe that you’re going to hurt someone’s feelings.

To combat this guilty feeling, you need to change your mindset by:

Pay Attention to All the No’s

When asked why it’s hard to say no, most of my clients relay stories about having hurt or angered someone.  They fear negative reactions and don’t want to hurt anyone’s feelings.

I’m guessing you have similar thoughts.  But here’s the thing: this scenario is an outlier.

The simple truth is that people are CONSTANTLY saying no.  It’s necessary to prioritize what’s truly important and get things done.  Effective leaders and highly successful people turn requests down all the time – not because they’re busy, but so they can achieve the success they want.

And guess what?  Most people don’t react in the way you imagine they will.  The most common reaction is acceptance.

That doesn’t mean that someone won’t be disappointed when you say no to them (after all, they’re asking you for help for a reason).  But don’t confuse disappointment with your inability to help them with being disappointed in you (there’s a difference).

Start paying attention to people when they say no.  Notice who’s saying it, how they say it, and the reaction they get.  This will open your mind to the reality that saying no is common and accepted by most people.

[Recommended Reading: Still have fears around saying no?  Discover how to conquer these fears using 7 Effective Tools for Building Self-Confidence & Taking Control of Your Life].

Identify What’s Most Important and What You Stand For

If you want to say no with ease and grace, then it’s imperative that you have policies (also called boundaries) that clearly delineate your values and priorities.  After all, it’s hard to say no with confidence if you’re not clear as to why.

Why Boundaries Are Necessary (and Aren’t What You Think)

Boundaries are the rules you set around how people must treat you so that you feel respected and whole as a person.  They are what govern your relationships with other people.

To effectively set healthy boundaries, you need to understand yourself deeply.  Otherwise, it’s difficult to know where to set boundaries and what they should be.  That means:

These three things are guideposts to setting priorities and what you stand for.  They help determine who you are.  And they’ll guide you to setting healthy boundaries.

How Understanding Yourself Well Help You Say No Without Guilt

Saying no isn’t really about the “no”. Instead, it’s about:

Once you have clarity around what you want (and why) and create clear standards around them, it’s easier to say no.  There’s deep meaning behind the “no”, and you’ll feel more certain and empowered (as opposed to fearful and worried).  And you’ll be focused on what you’re saying yes to (your priorities and values).

[Recommended Reading: What Living A Guilt-Free Life Really Means (and How To Do It). 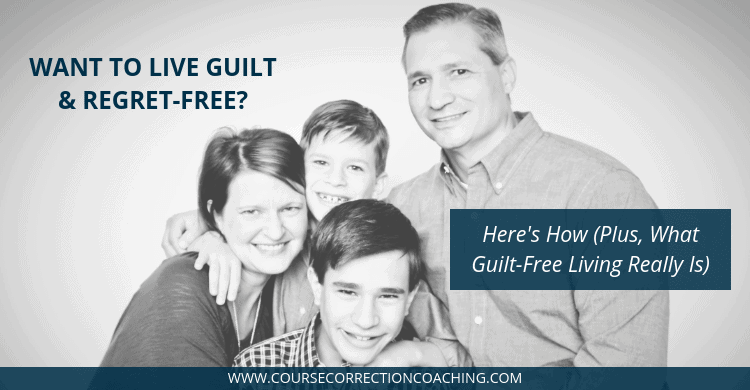 Case-Study On How a Mindset Shift Works

One of my clients (Amy) came to me as a self-described “yes” person who said yes to everyone except herself.  She felt overwhelmed by life as a result.

In our coaching together, Amy discovered that she hadn’t thought deeply about her boundaries or why she even wanted them.  She knew she needed them and that she wanted to feel less overwhelmed, but that wasn’t enough of a reason for her to say no with confidence.

Fast-forward a few sessions and she was saying no more often (and even felt good about it).  What changed?  She got clear around the why behind her no’s, which made her feel empowered and gave her confidence do what she wanted.

You can do this too.  Get clear around who you are and your true priorities.  They will give you positive reasons for saying no.

But what can you do when this isn’t enough?

When Being Pressured to Say Yes, How Do You Say No Without Feeling Guilt?

What about when someone is persistent and applies big-time pressure?  Your mind might be SCREAMING at you to say no, but you’re tempted to give in because they won’t stop asking – even begging – you to help them.

Here’s what to do:

What you need is to ease the pressure you’re feeling while taking a moment to think more clearly (so you can remember why you want – even need – to say no).  The best way to do that is to put them off.

Tell them one of the following:

The point of this is to give you breathing room.  You’ll have time to gather your thoughts, connect to why you want to say no, and create a response you’re confident in.  Don’t let anyone harass you to give them an immediate answer.  Be prepared with a go-to response that gives you some time.

One final note: don’t ask whether you can think about it.  Instead, TELL THEM that you’re taking some time for that.

Step #2: Be Helpful or Make a Counter-Offer

There’s no rule against offering friendly advice, helpful information, or making a counter-proposal on how you can best help them (that works for you).   Here are some examples of how to help when saying no:

This method is always open to you, but is especially helpful when you feel pressure to say yes.

[Recommended Reading: 3 Science-Backed Strategies for Living Without Guilty Feelings as a Working Mom].

How to Say No Gracefully and With Ease

What’s the best way to say no without feeling guilt, fear, or worrying about hurting their feelings?  Here’s how to put it all together and say no with ease and grace:

I have a friend who has a habit of answering yes/no questions with lengthy explanations about the reasoning behind her answer (and she does this without ever giving you a yes or no).  I’ve found that most people who feel guilt around saying no tend to do the same thing.

When saying no, start with “no” (or something that clearly means the same thing, such as “I can’t”).  Don’t beat around the bush.

And whatever you do, don’t go into a long-winded explanation justifying yourself.  You don’t need to justify your reasoning.  All that does is bring on more guilt (and opens the door to more pressure being applied, because they’ll smell blood).

You know the saying that “no” is a complete sentence?  I supposed that it is, but only if you want to be rude (which will only make you feel guilty).

To say no with kindness, give a brief 1-2 sentence explanation as to why you’re not able to help them.  This isn’t about justifying your answer, but about being kind and compassionate in how you say it.

If they don’t take your initial (or repeated no’s) to heart and keep asking, it’s okay to sound like a broken record.  It’s even okay to get shorter with them in how you say it (this is when it’s okay to use “no” as a complete sentence).

Here are some ways to say “no” again and again (without getting pulled into justifying yourself or sounding weak):

A Few More Quick Tips For Saying No Without Guilt

Here are a few additional tips to help you say no without feeling guilt:

In summary, to start saying no with grace and confidence (and kick guilt to the curb):

And now I want to hear from you!  Which tip or strategy above do you think will help you the most?

And before you go, don’t forget to download your 5-step Guide to discover your core personal values so that you can better understand your priorities in life and what you stand for.  Download your free Guide here: